“You have to learn to put yourself in visitor’s shoes – they have a whole museum at their disposal, so how am I going to persuade them to look at this object?” 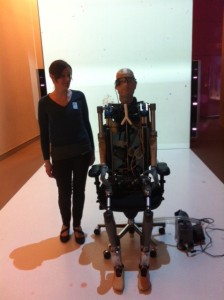 I research and develop exhibitions about contemporary science and engineering. I also write for the Guardian’s “Notes and Theories” blog.

What does your role at the Museum involve?

It’s very much like a TV researcher role – we have to find science and engineering stories that are relevant to our visitors’ lives. Then, we need to identify a suitable expert to interview, and a cool object for display. Once all that is in place, we start the logistics of bringing the object in, arranging interviews and photoshoots, and writing all the labels and interpretative text for the gallery. We work with new media engineers to creative interactive displays, and with designers to ensure the physical layout of the exhibit is attractive. Then, once the exhibit is live on gallery, we liaise with our Press office to ensure as much publicity as possible. In between there is much coffee and swearing. Again, rather like TV.

The Museum attracts a vast range of people: school groups, families, independent adults and retired people. My Guardian stuff has an audience of … well, Guardian readers. And friends who feels obliged (under pain of My Fake Disapproval) to read them.

In 2004 I entered the New Scientist essay competition, and won a runner up prize. That got me thinking that maybe I was quite good at this stuff, so I decided to enter all the writing and poster competitions that I could. I was pretty successful at that, and I loved doing it, so stared to think about scicomm as a career.

I was still doing my PhD at this point, but I started trying to do some freelance work. I write a few pieces for Mexicolore and Herbs magazine, and then, whilst doing my postdoc, I had an article accepted by the Guardian. Around this time – somewhat informed by my cack-handedness in delicate laboratory situations – I decide to go for a full-time science communication career. (I figured that by writing about science, rather than doing it, I was less likely to cause an environmental and or/diplomatic incident.) I did an internship at the BBC’s Science Development department, and after that I landed here at the Museum.

I think I’m fairly good at talking and writing about science in a friendly, accessible way. I like finding out what scientist and engineers are doing, and telling the wider world about it.

Apart form being good at writing, what is it about it that gives you pleasure?

I love language anyway, so I take pride in crafting a well-structured sentence.

Is there a specific format to the writing that you do?

That depends – Museum textual content does follow a specific format, and we have our excellent proof-reader, Lawrence, to ensure that we stick to Museum style.

The Guardian encourages an individual voice, so as long as I am accurate with the facts, I feel able to be quite free with my style.

How tricky is it to write about something you have no expertise in?

It’s not always easy, but the best thing to do is talk to the experts, and ask them to explain anything you don’t understand. No-one is expert in everything – it’s an ongoing learning process, for me as much as for our visitors. And what I like about the Guardian is that it encourages readers to contribute– going Below The Line can be a nerve-wracking experience, but also an educational one.

As some one who writes, what does content development at the Museum do for you?

It forces us to distil a story down to its essence – we have to work to very strict word limits. I have to remember that what interests me is not necessarily what will interest the greater number of people. You have to learn to put yourself in visitor’s shoes – they have a whole museum at their disposal, so how am I going to persuade them to look at this object? Your text must grab their attention within the first sentence. Otherwise they’ll go next door, and look at the dinosaurs.

If we’re going to inspire young people to a career in science or engineering, then we need to ensure that they get to hear about the activities of scientists and engineers – we need to show that these careers are accessible, and that science isn’t an esoteric activity done in isolation from the rest of the world.

The same goes for an adult audience too, I think – I’d like to show that science belongs to everybody, whether they are an active part of the research process or not. All informed opinions on science are useful, so we need to ensure that as many people as possible have access to the information they need to develop an informed opinion.

I get to talk to some fascinating people. Honestly, I am never bored!

I can’t choose a favourite, but I did love the High Performancefestival that we held to mark International Women’s day 2013. HP was a festival of motorsport and aero engineering, and all of the engineers who took part were women. However, we put the emphasis firmly on the engineering and the science, rather than on the gender of the participants – we didn’t want to present the idea of “women engineers” as some kind of novelty – it’s totally normal for women to be engineers, even in the supposedly masculine world of motorsport. In that respect I think we were successful – visitors came to see the cool cars, and many people didn’t even notice that all the engineers were women.

You mention that many people didn’t notice the women were engineers at the HP festival, was that not a disappointment as you were trying to showcase Women in STEM?

Not at all; I considered it a mark of success that people were unsurprised to see women doing engineering. One of the engineers told us that it was a pleasant change to finally be invited to talk about engineering, rather than being a “woman in engineering”. Personally I dislike being categorised as a “woman in STEM” – I am in STEM, and I just happen to be female.

Aye, ongoing exhibition development at the Museum, and any articles I can persuade James K at the Guardian to look over.

I’d start with creating your own science blog, just to get practise at writing for a non-specialist audience. Find original research articles, and try to explain them in no more than 400 words, with a few pictures. Once your blog has a good few articles on it, start pitching to editors. Send a pitch of around 100 words, and link to your blog – that’s the best way for an editor to gauge your writing style. Don’t be disheartened if you get rejections – I spent a good year being rejected before I got my first acceptance.

My BBC internship was really useful, but unpaid. I could only afford to do it because I’d saved up a couple of grand during my postdoc. I certainly could not have afforded it whilst studying. I wasn’t living in London when I got the internship, so I had to pay two sets of rent for the time that I was there. In that respect Londoners (or the wealthy) have a huge advantage when it comes to getting experience, which isn’t really fair. I would advise non-Londoners to try their local radio station, or ask their local paper if they’re interested in a weekly science column.

I’d also consider whether you ant to be a full-time science communicator, or an academic who also does science communication. If you want to go into TV, for example, you may be better off remaining in research. You will have noticed that most of the BBC factual presenters arefull-time researchers.

Finally – and it’s a cliché – don’t give up. I was never the star pupil; I left school with only two GCSEs, and ended up washing dishes in a hotel kitchen. It took a few years of that before I considered going back to education; I never considered myself to be one of the clever people. I still don’t. I think if I’ve got this far, it’s more from a refusal to accept reality than from any great skill – but here I am, anyway!