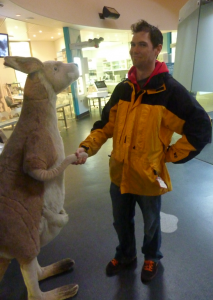 “It has shown me how to expand my ability reach the right audience, and tells me what I might like to try, and what I know I don’t want to do.”

The Institute of Cancer Research

A big fan of Science Showoff, an open-mic science night in various pubs around the country, and am just starting out on STEM work for schools.

I’ll talk to anyone who seems at all interested; for me, science communication is about providing jumping off points into topics people maybe didn’t know about but would be interested in if they did. And if you think of it that way, then i suppose everyone! Science isn’t niche; everyone already uses it and benefits from it, even if they think they don’t. Perhaps the target audience for me are people who think that science isn’t ‘for’ them; but they already are scientists, and the rest is just semantics.

Natural disposition, I think, but it has been great to see and to speak to people who are actively doing things. It has shown me how to expand my ability reach the right audience, and tells me what I might like to try, and what I know I don’t want to do.

‘Science communication’ is a tautology; science is nothing without the process of explaining an observation you’ve made. If you’re not telling people about what you have found that appears to be true, then are you really doing science? And the fact that you can usually find a way to work on things that you, personally, find interesting, is quite remarkable. That’s really quite rare, and valuable.

‘Science’ has become a dirty word in a media age; a catch-all that is used to wave away any responsibility for things. “Scientists,” begins the news report. So frustrating! Scientists are people, and – crucially – people are scientists! Imagine: your phone isn’t working; you try charging it, replacing the battery, you try your friends battery, etc. whether you call this the ‘scientific method, hypothesis testing, running experiments’ or not, it doesn’t matter! You’re performing (useful if trivial) science, as you routinely do without realising, and what you call it doesn’t matter at all! I like to get people back to that, if I can. Enjoying the thing, and not worrying about the thing’s name.

Any moment where you can see that someone has got something out of what you’re doing, the thing you’re building, etc. The best ones are when people have gone away, and come back to you later to talk about it again after doing some of their own research and reading.

So far I’ve got more projects on my ‘to do’ list than the ‘done’ list! I managed to get a good debate at work about the effectiveness of cycle helmets (spoiler: they’re no good!), and it was one of the liveliest seminars we’ve had there. Personally, I have always got a lot out of explaining to my 90+ nan about my work, because she is always so fascinated. That’s an inspiration to me.

I have a few things in mind: Piet Hein and the Superegg, The Most Dangerous Thing you can do with a Microwave, and I’m hoping to do some more general careers talks and mucking around with anyone who wants to play.

I always go back to Feynman for advice: whatever it is you love to do, just do it. But! Do it A LOT. There are no shortcuts to anything worthwhile; effort itself is what makes things worthwhile. And as much as I personally struggle with it, you need to go and talk to people, not wait for them to come to you. Show you care, are willing to work, and you’ll get all the help you need.