“science becomes infinitely more entertaining and valuable to people when they see that it doesn’t exist on some deserted island only inhabited by socially-stunted misfits in ill-fitting clothing, but rather that it connects to other things that they like, and that they don’t have to feel awkward or excluded by being “into it”.” 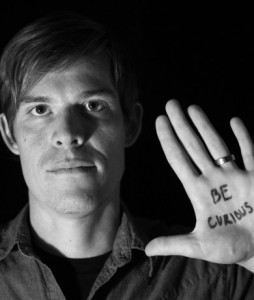 PBS Digital Studios, and myself. And for that glow cloud, hovering outside of town, that no one is sure actually exists.

I write and host (and sometimes film and edit) a YouTube series about science called It’s Okay To Be Smart, which is produced by PBS Digital Studios (our public broadcasting service here in the States). I try to uncover the amazing parts of everyday life as they relate to science. One week that might mean thinking about how much air there is around Earth, the next week it might be about superheroes and their animal counterparts. I also write an award-winning science-themed Tumblr, which is just like a normal blog, but with more animated GIFs and the occasional picture of Carl Sagan riding a dinosaur while holding a light saber. I also do the occasional bit of freelance science writing.

I make stuff for curious non-scientists of all ages. But since I’m on Tumblr and YouTube, which are pretty young, most of my audience is 15-35. But I resonate with people from 8 to 80.

I try to reach out and grab people who might not think they want to read about science, and then politely trick them into doing so. That might mean using super-engaging photos and videos, or internet memes, or art as a hook. My driving principle is “science plus ____”. By that I mean that science becomes infinitely more entertaining and valuable to people when they see that it doesn’t exist on some deserted island only inhabited by socially-stunted misfits in ill-fitting clothing, but rather that it connects to other things that they like, and that they don’t have to feel awkward or excluded by being “into it”.

Of course it helps if I can do that while being funny, or poetic, or dropping in references to pop and internet culture, all while clearly explaining why things are awesome. Someone once said “Never underestimate their intelligence, and never overestimate their vocabulary.” That.

Circa 2009-2010, like many people in their late 20’s, I started a Tumblr blog, because our parents were getting on Facebook and we needed a place to be goofy and express ourselves without them judging us. I filled mine with my interests, which are science and art and humor and Neil deGrasse Tyson GIFs. I started adding little explanations and curating interesting science from around the web, and people really seemed to enjoy that.

All this time, I was finishing my PhD in biology, blogging while a gel was running, or researching a script instead of reading that paper that I brought home to read before bed. One day, I realized that I was a science communicator and that people were actually listening to me! So here I am, 9,000 posts later. PBS apparently liked what I was doing and asked me if I’d like to make a science show for them. I said yes approximately 1.3 seconds after they asked. It was only in my last few months of my PhD that this became something I could actually do for a living. It took a great deal of practice and commitment to get there, and I still look at myself as a new kid on the block, wide-eyed, occasionally tripping over my feet and wondering if I really belong. But everyone feels like that, of course.

I got a great amount of support, coaching and encouragement from the science online community, too. I owe my peers a lot.

Mostly because I can’t not do it. I was already the guy at parties saying “Hey, let me tell you about this cool article” or “Did you know that bees can see ultraviolet light? How cool is that?!” This usually ended with people giving me a funny look and excusing themselves from my presence. So I decided that I might as well do it on the internet, where I could reach even more people, and where I couldn’t see them walk away.

I genuinely enjoy teaching people how the world works, and I think that’s a large part of what any science writer does, even if they don’t think they do that. Mostly I’m just tired of hearing how “the general public”, whoever they are, don’t accept science. I think “science” needs to accept part of the blame there, because it hasn’t always done the best job of telling people why its likable. It sounds very lofty, but I really believe that by giving people a positive experience with science every day, I can help change how they view it, and how they experience it, even if it’s just a little bit. There are a lot of younger science communicators that feel this way, like many of my YouTube comrades, or even pages like IFLS. We are not afraid to cover the “wow beat”, as Ed Yong calls it. We understand that not everyone needs to understand the math behind quantum mechanics in order to understand that magnets work because of quantum mechanics. It’s a different kind of magic. Will we make a difference? Ask me in ten years when our audience has voted a few times.

We have less than two years until Marty McFly lands in his DeLorean (October 21, 2015). We officially live in the future. Quite frankly, a person can not be a fully engaged citizen of planet Earth today without some knowledge, awareness and interest in science. And it enriches our experiences in the world. As Richard Feynman said of flowers, “science knowledge only adds to the excitement.”

If we can break down the barriers of intimidation and education that contribute to some people’s distrust of science, then I think we’ll create a better future. Politics, policy, jobs, environment . . . all that dire stuff, but also happier humans, who enjoy simply knowing more today than they knew yesterday.

You remember the old cartoon scenes where a light bulb goes on above someone’s head when they have that “Eureka!” moment? Well, that happens in real life, only the light goes on in their eyes. Every teacher already knows this, but that moment is like the best drug, in that it’s addictive and makes you feel really good, but doesn’t ruin your life or take your money. I get to experience that every day, in so many ways, with so many people. It’s awesome. I really feel like I make a positive difference in people’s lives, through science.

Making YouTube videos has just been the most fun ever. There are no rules. I get to create exactly what I want to create, to tell the exact story I want to tell, in whatever way I want to tell it. Sometimes, other people even enjoy it! My favorite project just wrapped filming, and while I can’t say exactly what it is, it involves several famous scientists that have turned into bobblehead dolls and have been transported to modern times via a temporal wormhole.

I am amping up my YouTube series to a weekly show, which means lots and lots more science and lots and lots less free time for me. I have some pretty special episodes and projects in the works for that, but too early to say.

Don’t wait for someone to give you permission to start. Just start. Know that you will not be good when you start, and you will refuse to read your own writing a year later, on account of how much you hate it, because you were so bad. But that means you are getting better. Work every day, even if you’re just thinking about the project you’re working on. Reach out to our community and ask for tips and feedback. This has been the most welcoming and helpful professional community I’ve ever been a part of. Look for somewhere where no one is talking about science, or some subject that isn’t being covered in the right way, and do that. Write a lot. Read even more.


NOTE: This interview happened before Joe’s A Very Special Thanksgiving video was issued, which proved to be both popular and controversial to many people. For those who thought it was controversial, Joe did write an apology and explanation behind this film. Because we’d already interviewed him we didn’t get the chance to discuss this with him, but hope to at a later date.