“Like any bit of PhD research, there is no simple answer!” 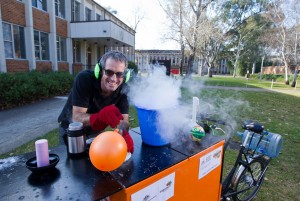 One of these shows is called “Green Power”, and it explores some of the science behind renewable energies.

Graham has been doing science shows for years, and he’s been doing them so long that he even decided to do some research into their effectiveness. He was curious as to whether or not science shows really do inspire those that watch them.

His research explored different kinds of motivation, from getting kids to keep studying science to the more specific like actually changing the way people think about climate change or HIV Aids.

And then what is it about a show that motivates or inspires your audience? Is it the presenter? The emotions? The humour? All these factors are important when looking at how effective a science show is.

Using a HIV Aids case study in SA, Graham looked at how motivations and beliefs changed from immediately before to immediately after the show, as well as whether or not they had changed again one month after the shows.

Graham has had the priveledge of doing science shows around the world, and for him, one of the most important factors to consider is your audience. Not just the age or gender, but the culture as well. Working in Abu Dhabi, you have to consider their cultural beliefs. These will be different again somewhere else. Every time you take a show somewhere, it has to be changed accordingly. This helps to build relationships with your audience, and allows them to relate to the science that is being communicated.

This was especially true for his HIV Aids show. It would have been difficult for the kids there to relate to the material in the show if Graham had presented it as a white man from Australia. So, Graham worked closely with local people and trained them to deliver the show.

It is working with local people and different audiences that keeps the job challenging and interesting for Graham.

“My belief is that a good science show presenter is a kind of tinkerer, an experimenter. Someone who hasn’t forgotten how to play.”

Informal and formal ways – talks about how he got into it.