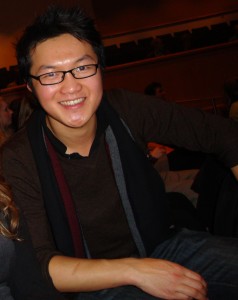 The future Dr Hou is currently researching the asymmetric brain (not the creational vs rational) but how asymmetry in our brains could be linked to evolutionary traits that we see in animals, including humans. For example chimpanzees have similar asymmetries to humans, so can he explore that to understand how we evolved language? He’s also looking at how some people with psychiatric diseases don’t have these asymmetries, and how this might be a sign of developmental problems.

His other passion is music: he plays the violin (and is very good – as you’ll hear!) However, he thinks it’s a shame that there still exists this underlying Two Cultures divide between art and science.

His belief is that children will engage in all of these things; singing, dancing, drawing, exploring. There is no end to their curiosities. “It’s very much a shame that actually, our education system very much puts people into this dichotomy of art and science when actually you could quite happily do both.” Both art and science need analysis and creativity, so why can’t we do both?

I asked Lewis about how some people believe that it is difficult to engage children in science, and they are automatically put off by the subject. What I wanted to know was whether Lewis thought this was natural, or was it due to our pigeon-holing culture?

“I think it’s very much the way science is presented and it’s a bit of a shame the way it is with exams it’s quite dry and sterile.” This is where Lewis brings in his science communication work. He hopes to liven science up a bit to inspire children to see that science can be fun.

He still finds that children are awed by the idea that he’s a scientist. “I really believe that 70% of science communication is showing that you’re a scientist AND a normal person.” He wants to show them that anyone can be a scientist, or is a scientist. He wants to say “Hey this is me, we’re having fun, we’re doing science and we’re breaking that barrier.”

In Lewis’ workshops he uses his musical talents to teach children about the inner workings of our brains. In his workshop “Fiddling in the brain”, Lewis teaching children how the brain listens to music. He contextualises the science so that it can be applied to their daily lives. “It culminates in all these children becoming my neurons and controlling me. So when the motor cortex, these kids vibrate, then I will have to dance!” Something I definitely want to see!

And he even has a song!

His other love is céilidh dancing. He plays in a céilidh band and on April 15th he will be adapting some céilidh dances to explore science concepts for a Science Céilidh at the Edinburgh Science Festival. You don’t need to know the dances before you join is as the songs will help you through.

“The Dashing White Sergeant, which is a dance where you’re in threes and you come together and come out again and circle. I’ve changes it to the Dashing White Blood Cell.” This will act as a model for the immune system, where people act out the roles of white, red blood cells and bacteria. What I’m excited about is that this céilidh is also coming to London at some point!

The last item on the agenda is his involvement in international science festivals. We actually met at the Abu Dhabi Science Festival in November 2013 where he was running work shops on neuroscience. He’s been travelling around the world doing science festivals for three years now and “it’s been a really good opportunity to go out there and train their local students to do science communication…you’re kind of passing the buck.” Seeing them loosen up and enjoy science communication is what he finds the most stimulating. The communicators go from serious determination to silly acting, and it really makes a difference.

But it takes lots of people time to warm up before they perform. Here I wanted to know what Lewis thought about science communication being all about performing. “science communication comes in different flavours… you have very different expectations of what it is.” As Lewis has noticed, he is noticed as someone who works with the Edinburgh International Science Festival team. They have a certain style and way of doing things that is different to other groups. He makes the point that everyone has a different way of doing science communication. “You don;t need to be theatrical to do it, but it is to enjoy it and be happy that you know the science…if you;re having fun then they’re [the audience] are having fun!”

My final question to Lewis is: What do you think science communication is? “Science communication is making people feel like they can engage in science. It’s the grey between the dichotomy of scientists and the public, and their shouldn’t be one.” He feels that people can’t engage, and he hopes that by doing good public engagement, science communicators can bridge this gap. Science should be accessible to everyone – he wants people to be able to question some of the claims made, and not feel inadequate or uncomfortable doing so.