“Douglas Adams always talked about that. A funny thing he used to say where “The terrible thing about having a dictaphone as an aid to memory would be that when you press the on button, it has a terrible habit of turning your brain off.”” 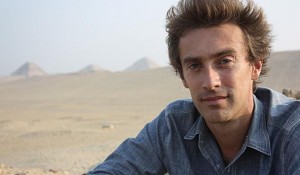 There isn’t much structure in this interview with Dallas Campell, as it was just a rambling conversation.

I can only apologise for three things:

2) that I hadn’t pressed record sooner as the conversation was great fun!

We start talking about the power of words, and the ability to remember things people tell you when you write them down.

“I’m in awe of people who can write. Can write with clarity and purpose and convey that sense of idea.”

and how there are some people who are brilliant with them (i personally think Dallas is pretty good with words…hence I let him do the talking!) And some (aka me) who question others to get them to say those lovely words. But doing interviews is more about putting people at ease than it is about forcing the answers out of them. And Dallas has much experience in this too.

We go on to talk about his adventures on TV. One of them is a documentary about the Secrets of St Pauls Cathedral, and the technology the program used to discover them. Dallas is also in awe of Wren because of his incredible talents as a polymath: someone who is intrigued by so many different things, and ends up trying them all out and being good at them too!

And this is potentially what draws him to science: Dallas has this incredible thirst for learning as much as possible about as many things as he can! But it’s not just the science, and the ability to be interested in many things. It’s really more about the cross-over between the two cultures that he revels in.

Another of his projects was Super-sized Earth, a BBC 1 programme where Dallas explored the frontiers of human understanding. Where he was trying to make people aware of the world around them. He then quotes Dawkins: “The Anaesthetic of Familiarity.” It was this that the programme was trying to wake the world up from.

Another documentary that is coming out soon is about treasure hunting (out early 2014), and to Dallas this was the ultimate Mr Ben adventure (a favourite children’s programme of his). A few weeks ago he was diving on a wrecked Spanish Galleon, in between Florida and Cuba…Definitely in it for the adventures.

So when he talks about science, it is always in broad terms, mostly based on his curiosity and tell amazing stories. Which is why he thinks he would be a terrible scientist: he simply cannot specialise because he is so interested in a wider range of things.

“I love the polar opposites: going from Christopher Wren one day….. and then off I go doing something about treasure hunting…”

But how he got into science communi….(uhum) errr leaning towards science presenting? It wasn’t accidental (art history, english and drama background) but it was more that he loved telling stories, and there are such great stories in science about adventures, excitement and curiosity.

We then get into a bit of a discussion about science at school…. Dallas didn’t like science at school. Unless you’re lucky and you get it, science is not associated with adventure. Instead it is an accumulation of facts, naming of parts. It took Dallas a long time to realise that science wasn’t about proving things, about collecting facts, about finding the answers and the end. It was more about continuing the search for questions.

“I remember when I found in a skip…”

He found some blank tapes when cleaning out William Willards office (BBC presenter). The tapes had the title “Growing up in the universe” and were actually 1991 Richard Dawkins RI Christmas Lectures tapes! And this just kick-started an incredible Eureka! moment.

We then go on to Science Communication, which I had already discovered is a term that Dallas doesn’t connect with.

“I don’t know its one of those terms that it’s such a narrow sounding term. And if you… and I suppose think of what i do as quite broad, so I don’t know if it applies”

So we try to find out why he is uncomfortable with the label of Science Communicator. Is it the idea of labels themselves? He doesn’t think it fits comfortably with him, instead: he is a storyteller of science instead…. But cliche or not, labels are useful. Alok Jha had a similar feeling towards the label Science Communicator…

“I agree with whatever Alok says. Listen to what Alok says about science communication and I’ll agree with that…. I haven’t listened to it yet.”

Science, to most people, is a subject studied at school, not anything more. And Dallas believes this is a shame.

“There is definitely a disconnect between people who aren’t involved in science at all, how they perceive science. There is something a bit odd about it….It’s a shame that they see science as such a narrow thing.”

It’s not like music or art. You wouldn’t say “Oh I hate music, I was rubbish at music at school.” This simply isn’t the case. Everyone enjoys music of one form or another. So why can’t this translate to science?

“Science is not a subject, its a method, a way of seeing the world.”

So how do we change science education at school? Let’s not go there… But mostly it’s down to the teachers. And maybe to provide students the opportunity to step back out of the classroom and books, and show them a little more of the Big Picture Stuff (referring back to the Dawkins quote above).

So even though he doesn;t like the label, he does believe this Big Picture Thinking (aka Science Communicaiton) is in a Golden Era at the moment. Prof Brian Cox, Carl Sagan, Richard Dawkins etc are all out there talking Big Picture.

One of Dallas’ favourite programmes has been Bang Goes The Theory (a programme on the BBC that he did with Jem Stansfield) which explores science of our every day lives.

Dr Who is also something he was involved with: a live show with Prof Brian Cox called The Science of Dr Who.

My favourite fact was that Albemarle Street [that the RI is on] was the first one way street in Britain because it was SO crowded with people desperate to come in and see these great lectures. So they had to invent the idea of a one way street.”

For someone who thinks science is not just for scientists, but is for everyone, he is also a fan of citizen science projects: the wisdom of the crowd.

“What a terrific way for people who aren’t scientists to actually get involved and actually understand a little bit about what scientists actually do all day.”

And we finished on that note…. I hope you enjoyed the ramblings….

“We’re very lucky in Britain to have such fantastic minds historically.”