“I’m really honoured to play a small part in some massive global endeavours and it’s fun to be able to share that excitement.” 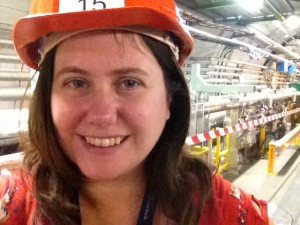 I communicate the contract opportunities available to industry at a number of large science facilities like CERN. I don’t think it’s what people traditionally think of when they think of science communication, but I have to help industry understand what large science facilities are and get them interested, so there’s a large component of communicating science and hopefully inspiring people to be interested.

Industry and businesses are my main audience, but this covers a huge range of people and knowledge levels. For instance, a company that makes magnets for particle accelerators will already have a good understanding of what particle accelerators do, but providers of language classes or IT manufacturers won’t necessarily have heard of CERN or other facilities.

I have to think about what will interest that individual and then focus on that. With CERN for example, most people are interested to hear that it has an annual procurement budget of around £325M but then I try to tailor my message. When we were trying to find patent lawyers to respond to a market survey, I focussed on the fact that people working at CERN have made a huge number of technology discoveries during their work. The biggest of these is the World Wide Web, but they have also made advances in touch screen technologies and developed particle beams which are used in cancer treatments. When contracts in civil engineering are released, I focus on the fact that CERN has a particle accelerator in a ring which is 27km diameter, straddling the border of France and Switzerland and 100m underground. In addition to its amazing science, CERN is also a major civil engineering accomplishment.

Once I’ve piqued their interest, I end with the ‘wow’ factor that CERN is a worldwide endeavour to understand the origins of the universe. I think that the companies who are working with CERN are genuinely proud and excited to be part of something so special.

I did a PhD in physics and joined STFC to work at the ISIS neutron source. I managed a project to coordinate the development of new instrumentation for neutron sources across Europe, so I always had a focus on technology for large facilities. I moved to Swindon to STFC’s head office and when a vacancy for the industry liaison role opened up, I thought it would be really interesting and so I applied.

I really enjoy developing new procedures and improving the way things are done. When I started my role, I looked at how to improve the way we communicated with industry and how to engage them and I think that’s shown a real increase in the number of companies who are interested in working with facilities. Over the last three years, the UK has won over £47M worth of contracts. These contracts have benefitted hundreds of companies and it’s great to have played a part in that.

As taxpayers fund science facilities, we have a duty to explain where that money goes and the work that the facilities are doing. Last week I met someone from industry who was quite cynical about why we should fund facilities. I spent a while explaining the benefits both to industry, technology and society as a whole and they left knowing why being involved in these global projects is worthwhile. We need to have that support for science and that only comes through understanding.

I love the variety of my work and enjoying speaking with a wide range of people. I’m really honoured to play a small part in some massive global endeavours and it’s fun to be able to share that excitement.

I needed to find companies who would be able to respond to heating and ventilation contracts coming up at CERN. I found a number of suitable companies and spent three days with a team from CERN travelling around the UK to visit industrial sites. One of the companies CERN met has gone on to win £1M worth of work and it’s satisfying to know that I helped to play a part in that.

I don’t have specific projects as such but this is a part of my daily work.