Rory Fenton, a physicist, humanist, and budding science communicator has written for the Guardian and was shortlisted for Amnesty International’s Student Human Rights Reporter of the Year 2011. Here gives his ideas of how best to go about the science vs religion debate. 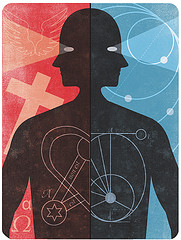 I’ve ended up writing quite a bit about the science/ religion question over the last few years- mostly because my own view kept changing. I’ve gone from conservative Catholic then to bat-shit-crazy atheist now, my metaphorical needle head-banging its way along the science-religion compass in a flurry of self-contradiction.

But along the way I’ve picked up some ideas about how to actually report on the debate in the first place. I suffered, dear reader, so you don’t have to.

The most important thing I can say about the “Can you be religious and a scientist?” debate is that it’s REALLY, REALLY BORING. I don’t think I can stress that enough. It’s boring because the answer is evident- yes, yes you can be. There are too many religious scientists like Robert Winston for anyone to say otherwise. Likewise asking, “Does science disprove God”, “Is science just a form of religion” and so on. The attention grabbing topics tend to result in heading banging articles. Much more interesting are the more nuanced questions- questions that aren’t so much designed to provoke wild debate as just interesting thoughts. Try asking an atheist scientist what questions she doesn’t think science can answer. Now that can be an interesting discussion. How about asking a religious thinker what they think they can learn from the scientific method. Getting people to reflect on what they believe rather than attack what others believe is more likely to lead to an interesting piece. After all, people should know more abut their own beliefs.

But maybe I’m wrong. Could just going for the Big Questions and bashing heads together produce interesting articles? Let me know your thoughts!