“What we encourage them to do is to take this knowledge and their enthusiasm home….do a dissection at home on the lounge carpet!” 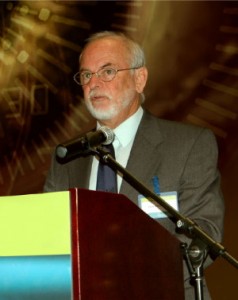 At the Abu Dhabi Science Festival 2013, I had the pleasure of meeting Professor Mike Bruton, the founding director of the Cape Town Science Centre.

In this interview with Speaking of Science, Mike talks about the work shop he is running at the festival called What’s Inside: exploring the insides of marine animals.

This fairly unknown world has been at the heart of Mike’s research for the last 40 years, and he hopes that it will fascinate the children at the workshop, especially some of the surprises they find inside!

We also talk about the Bahrain Science Centre that Mike has helped develop over the last two years. Having been fortunate enough to work with MTE Studios, working in science centres in the middle east for many years, Mike has the know-how to set one up in this culture. But moving there full-time was a bit of a shock.

As with any projects that are being set up from square one, there are always issues and kinks that need to be explored and ironed out. So Mike tells me about some of the challenges of setting up the Bahrein Science Centre, as well as the joys.

It’s interesting listening to Mike talk about what it takes to make a successful science centre. It’s all about making sure that the centre offers things that the audience want, especially as they are coming to you out of choice.

One of the other exciting things that Mike has been involved with is the Science Centre World Conferences (held every 3 years), and that he chaired the 6th one in Cape Town in 2011. Over 400 people from 70 countries converged onto Cape Town, focussing on Science Across Cultures: adjusting the way science is taught depending on the culture of where you are teaching, and the importance of indigenous knowledge.

this links directly to some of Mike’s research, as he has been to some more isolated areas on the planet, where he has been learning about the inventions of indigenous people the world over. What he finds fascinating about them is how they make use of certain properties of the world around us, and then how that is transferred into the western world.